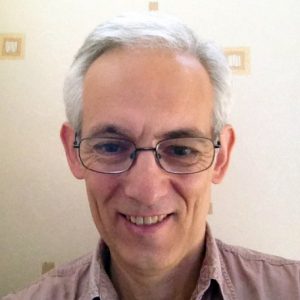 A long time ago in a galaxy not that far away, Andy Redsmith was born. I grew up in Liverpool and Runcorn, went to university in Salford, and have lived in Manchester ever since. The people there are great, but we don’t talk about football.

I worked in the computing industry for long enough to remember ALGOL (a language that’s not quite as dead as Latin, but well on the way.) Over the years in IT I’ve worked with some very clever people and some complete weirdos; none of whom bear any resemblance to the characters in my writing. Honest.

I have a wonderful wife, one grown-up son, and a loft full of old Marvel comics. I’ll get round to selling them eventually. That’s the comics, not the family.

My debut novel ‘Breaking the Lore’ won the 2017 WordsWithJam First Page competition, judged by the author Alison Morton. She says in her judge’s report: “The author’s spare yet vivid style and clever way of plunging us into a situation where questions are the only way out demonstrates confidence, a confidence that engenders trust for the reader. The combination of a standard police investigation with a fairy story(!) opens doors to all kind of possibilities.”